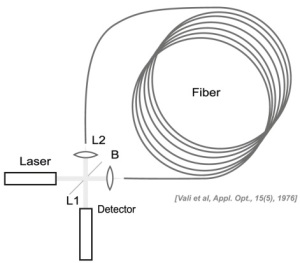 1913 Georges Sagnac ? interferometer for rotation detection where the two directions within the rotating loop see slightly different optical paths.Sagnac?s original experiment used a loop about 1m square and detected fringes when the loop rotated at a few times a second.

The observed fringe shift does not depend on:

The observations of strange, rotational deformations of architecture structures which appear after Earthquake have become the major motivation for constructing our device basing on the Sagnac effect. These observations do not have obvious theoretical explanation. There are many theoretical theories and considerations, nevertheless they are not confirmed by experimental data. In the figure below we present two instances of such atypical deformations. Figure 1a presents the rotational deformation of the two ornamental obelisks of the Charterhouse of Serra San Bruno in Calabria, Italy after the Calabrian Earthquake in 1783 (Ferrari G (2006). Note on the historical rotation seismographs. In: Teisseyre R, Takeo M, Majewski E (eds) Earthquake source asymmetry, structural media and rotation effects. Springer, Berlin,  367?376).  In Figure 1b one can see the rotation of the monument of George Inglis (erected in 1850 at Chatak, India) as observed by Oldham (1899) after the 1897 Great Shillong Earthquake (William H. K. Lee, Heiner Igel, and Mihailo D. Trifunac (2009). Recent Advances in Rotational Seismology, Seismological Research Letters, Volume 80, Number 3).